Start a Wiki
This article is about Plant Farming.
For the farming of mobs, see Animal Farming.

Plant Farming is a game mechanic in Minecraft that is used to obtain certain plant-related foods.

Harvesting fully-grown Crops can be done manually by breaking the plant by hand. However, it can also be made semi-automatic with mechanisms involving a Bucket of Water and some removable blocks (moved by Pistons) as the Water can push the crop to the Player. An even simpler option is to use a Dispenser with a Water Bucket. This can be combined with water streams and/or Hoppers to place harvest into Chests or other containers.

Melons, Pumpkins, and Sugarcanes can be made into fully automated farm using either an Observer or a timer circuit to trigger the harvest. The Cacti can also be made into fully automated farms, with the combination of an obstructing block (so the Cacti can't grow into it and therefore breaks automatically), and a water retrieval system below. All the other crops must be replanted manually, whilst the other aspects can be automated.

Seeds are vital to farming. Seeds can be obtained by using a Hoe on a Dirt or Grass block, breaking Tall Grass or Ferns, or finding a Village. Cacti are abundant in deserts but are not food items. 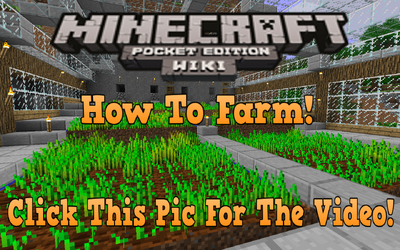 Retrieved from "https://minecraftbedrock.fandom.com/wiki/Farming?oldid=374021"
Community content is available under CC-BY-SA unless otherwise noted.